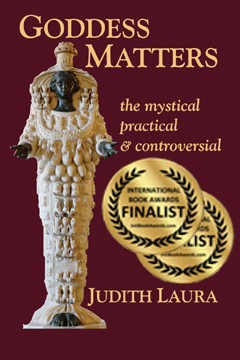 Goddess Matters also became available as a Kindle E-book beginning July 17, 2017. The Kindle edition is enrolled in Kindle Matchbook, which gives you a lower price on the Kindle version if you first buy the print version.

Recipient of Finalist Awards from
International Book Awards 2012 , in both the "Spirituality: General" and "Women's Issues"categories  Goddess Matters: The Mystical, Practical, & Controversial, presents an in-depth look at today’s global trends in Goddess spirituality and emerging Goddess religions. The book covers a wide range of topics, some of them rarely discussed in other books. These include contemporary Goddess temples and conferences, Goddess ethics, various controversies, practical approaches to sexual risks, responses to natural disasters, emerging Goddess figures in Judaism and Christianity, and cutting edge thought that relates Goddess and science. The book also has chapters on intuitive and psychic work, death and the possibility of “afterlife,” various approaches to spirituality and religion, and a look at the probable future of Goddess spirituality.

There are also chapters with definitions of terms used to discuss religion, and words used to describe psychic work. Judith Laura began writing about some of these subjects in her column in the journal, The Beltane Papers, 2002-2007, and in posts to her blog. She develops this material more fully in this book, making for fascinating reading both for those within and those outside of the Goddess movement.

From The Introduction. . . .Goddess Matters is divided into six sections. The first section, “Today’s Trends,” opens with a chapter that gives a brief history of the awakening to female personification of deity in the 20th century, and then goes on to explore current challenges. Other chapters in this section look into the influence of the Unitarian Universalist course, “Cakes for the Queen of Heaven”; the search for a name for those for whom Goddess is primary; and the emergence of Goddess figures in Christianity and Judaism.

The second section, “Thealogy,” gives brief definitions of words used to talk about deities and the divine; offers a way to understand “Goddess” in addition to concrete representation, a way that may be more compatible with science and other contemporary views; describes Goddess ethics and their sources; suggests how to meet challenges to faith; and offers ways to recognize what your spiritual approach is as well as identify the approaches of others.

In the third section, “Controversial Words,” you will find opinions on uses of some terms that not all Goddess folks agree with.

The fourth section, “Metaphysics,” covers topics that are proposed by or shared with other spiritual paths, such as the notion that we create reality; psychic or intuitive experiences; a theory of how one form of divination, tarot reading, works; “channeling” and how it differs from other ways of receiving spiritual or creative information; and whether there is life after physical death. This section also includes a chapter with definitions of various words used to discuss psychic experiences and activities.

The fifth section, called “Practical Thealogy & Applied Metaphysics,” relates the material from the second and fourth sections to more commonplace, everyday situations. Its chapters discuss how Goddess groups can better accommodate those with physical disabilities; how our Goddess assumptions affect our approach to sex. . . ; how we personally respond to deaths of friends; and. . .the beginning of the passing of the generation that brought us what is commonly called “second wave feminism,” including forms of spiritual feminism.

The book’s last section, “Looking Forward,” includes an in-depth look at Goddess temples, and other growth trends. The final chapter looks at cutting edge thought of several Goddess authors, presenting concepts some people may find surprising in a Goddess context. . . .

This is a lucid, well-written and engaging book, and a timely one, bringing together many different aspects of the current Goddess movement and doing so in a way that encourages thought and discussion. . . I dare say the book will become even more useful as the years pass. . . .there’s discussion of thealogy, usefully giving us definitions and ways to understand “Goddess” both theologically and sociologically. Judith Laura isn’t afraid to deal with controversial material and meet challenges and I’m grateful for that.

For a Goddess beginner this could save some heartache in trying to identify one’s path…and what to call oneself!

. . . There’s a very useful discussion of the term “Goddessian”, which I must admit I didn’t take to on first coming across it – the word seemed awkward, a made-up word (not that there’s anything wrong with making up words, feminists have done it for decades, and come to think of it, Shakespeare was a dab hand.) But I’m growing to like the term and it certainly fits better than pagan, for me.

Once again, Goddess Matters gives us a full discussion and makes it easier for us to identify ourselves. . . .
I particularly enjoyed the section on immanence vis-à-vis transcendence, but for me the most exciting section is that entitled Goddess as Flow. I’ve a strong left-brain bias, which has often seemed a disadvantage but here my scientific side comes into its own. The author says that the ancient Goddess epithet: “She who flows through all” connects us both to the past and opens the way to the future, and that is beautifully true.

So while we have our precious ancient statues and other remains, our mythologies and stories, the concept of Goddess as Flow fits in beautifully with modern concepts in science. . . .

For anyone new to Goddess ideas, there are many more useful definitions, not given dogmatically but with plenty of room for people to choose their own interpretations within them. There’s much more to the book than the few sections I’ve highlighted and I’d recommend it to all kinds of people – anyone studying Goddess, who wants to understand the past and learn how the current Goddess spirituality movement got started, but even more so to anyone who wants to think about where we’re going, and how we can all influence that direction. ~Geraldine Charles, Goddess Pages, Winter 2012

....The author, who has long experience in the Goddess movement as both a participant and a writer, has written a forward-thinking text about what Goddess spirituality is and what it can become in the next few decades. Laura champions the evolution of Goddess spirituality into a legitimate religion with a concern for inclusiveness in language and practice. . . .

One of the lovely metaphors Laura uses to describe Goddess is Goddess as flow.
She lyrically describes, "Goddess is the flow of rivers to the sea, the flow of our blood, the flow of love between people, and the flow of air in breeze, hurricane and jet stream. She is what connects us,
not only like a link in a chain but also like an electrical current."
This characterizes Goddess as natural, kinetic, and dynamic. She is part of All, and All is part of her.
What an empowering, joyful feeling that evokes!
~Linda Kerby, SageWoman,  Spring 2012

...solid material and extremely readable"
~Rachel Pollack, author of The Body of the Goddess and Tarot Wisdom

Goddess Matters is a fascinating look at where Goddess religions are and where they may be going.
~HecateDemeter

Goddess Matters is a welcome addition to the Goddess spirituality library.  Judith Laura has identified a variety of topics which many of us have been discussing informally for a long time.
It is great to see these brought together under one cover, with informed critique,
as a resource which will both challenge and inspire our discussions and deliberations into the future. ~Patricia Rose, Ph.D., co-author of Gaia Emerging: Goddess Beliefs and Practices in Australia

It’s the ideal book to dip in and out of when you don’t have time to settle down with a long read,
and it also provides the stimulus for thought-provoking ideas of Goddess practice and theory in the world today. ~Cheryl Straffon, Goddess Alive!

About the Author
Goddess Matters is Judith Laura's third Goddess book.
She is also author of the award-winning Goddess Spirituality for the 21st Century  and She Lives! The Return of Our Great Mother, now in its third edition. She recently released an audiobook, Goddess Guided Meditations,  which she narrates. Her other books include the triple-award-winning novel, Beyond All Desiring, and Three Part Invention, a novel. Her Goddess writings, fiction, and poetry have been published in a wide variety of journals and anthologies.
For more about her writings and other biographical information, see About Judith Laura.

Judith Laura donates at least a third of her royalties from her books to charities benefiting women. (Because authors don't get royalties from used book sales, this cannot include the sale of used books.) Some of the online booksellers that carry Goddess Matters in the US, include  amazon.com.  bn.com, booksamillion,  Politics and Prose (DC and online), Powell's Books, superbookdeals,

And if it's not on the shelf of your favorite brick-and-mortar bookstore, please ask them to order it through Ingram or Baker and Taylor.

In recognition that not everyone can afford to buy books, and in gratitude for the great service libraries provide, we share a partial list of university and public  libraries whose holdings include this book as of April 2014: