Goddess Spirituality for the 21st Century 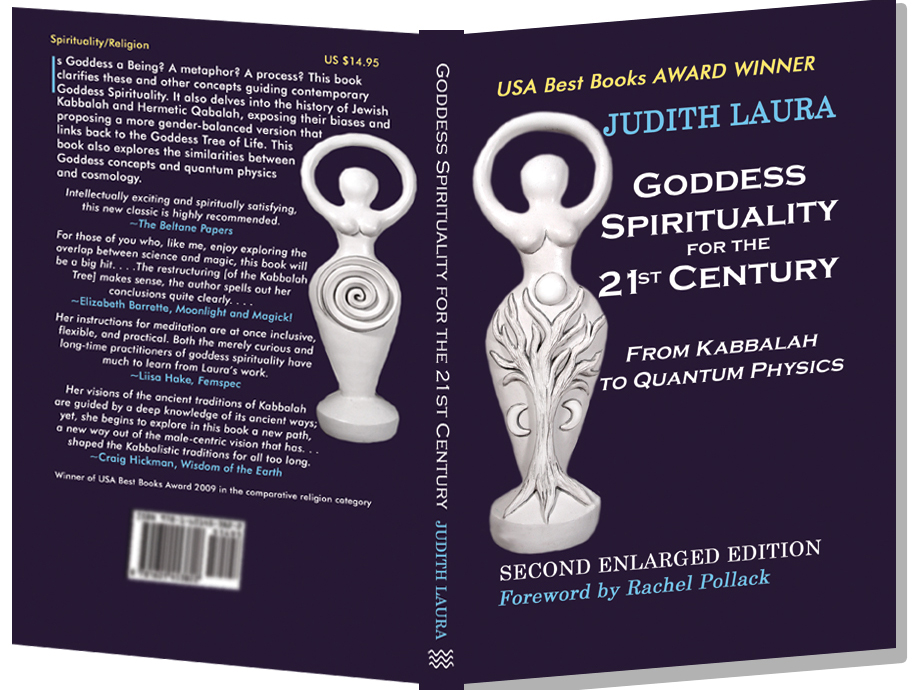 This is the second printing of the Second Enlarged Edition and, along with some minor editorial changes from the first printing, it has the complete text of the original 1997 edition PLUS:

Excerpt from Rachel Pollack's FOREWORD
[[Deleted material is indicated by ellipses (dots). ​ The length of the actual Foreword is at least 3 times the length of this excerpt]

This remarkable book manages to say more than many works on these subjects four or five times its size. What’s more, what it says is not just clear and lucid, and stocked with information, it also is valuable for women and men living their lives today. . . .

Through the principle of the spiritual is political we can come to understand the way an all-male concept of God has distorted our society and our own lives. The modern Goddess religion, based on archaeological discoveries, mythological clues, and contemporary inventions, has helped many of us overcome those distortions.

. . . .Because Qabalah includes Goddess imagery, and Kabbalah seems to address the idea of re-uniting male and female, they have both attracted many people who seek a traditional base for Goddess work. And yet, as Judith Laura demonstrates so precisely and eloquently, the Kabbalist traditions are not somehow magically free of patriarchal bias. They are not an absolute truth outside of culture. On the contrary, they, like all other religious traditions, are the work of humans—humans at a very intense state of consciousness, but still humans formed, at least in part, by their culture and its assumptions. . . .

Esoteric beliefs usually include an assumption of privilege. They claim to come directly from divine sources, and usually ancient origins. . . .They also claim to speak of truths very difficult to grasp. All this results in texts that are mysterious and hard to comprehend, along with a readership that accepts their divine authority without question. Laura has read vast amounts of material, and then has outlined the ideas and information in clear and concise language. The wealth of information alone would make this book of great value. But she goes further, for she shows us that these ideas did not emerge from instant revelations but grew over time, and in historical settings.

And then she goes further still, for she suggests ways we can rework, perhaps even restore, a genuine balance of male and female. . . .And then, so we can make use of this river of clear information, she gives us meditations and exercises to make these symbols our own. . . .she then goes on to apply those same remarkable abilities to a field at least as dense and difficult as Kabbalah—quantum physics. . . .  As with Kabbalah, Laura manages to absorb vast amounts of information…and then give it out in precise details and large ideas. . . .

Goddess Spirituality for the 21st Century is a rare book, a kind of sacred quest of ideas. We can all give thanks that Judith Laura has undertaken it, and fulfilled it with such dedication.

Rachel Pollack is author of The Kabbalah Tree, The Body of the Goddess, and many other books on metaphysical subjects, including Tarot.

Comments from Reviewers and Readers

"For those of you who, like me, enjoy exploring the overlap between science and magic, this book will be a big hit. . . . The restructuring makes sense--the author spells out her conclusions quite clearly--and this brings Kabbalah within reach of women who would otherwise ignore it. The adjustment may also appeal to men who prefer a good gender balance in their magical workings."
~ Elizabeth Barrette, Moonlight and Magick!

"With Goddess Spirituality for the 21st Century, Judith Laura has provided an illuminating, inviting introduction and straightforward, user-friendly manual for the study of goddess spirituality and Kabbalic traditions.  While her interpretations of scripture and Kabbalah will doubtless lead to disagreements with members of various schools of thought, many will find great intellectual intrigue and spiritual comfort in the sources of Goddess presence in the story of creation which Judith Laura has exposed.  Her instructions for meditation and chant are at once inclusive, flexible and practical.  Both the merely curious and long-time practitioners of goddess spirituality have much to learn from Laura's work." ~Liisa Hake, FEMSPEC

"Judith Laura guides the gentle reader through a personal voyage of meditation and reawakening. Her vision of the ancient traditions of Kabbalah are guided by a deep knowledge of its ancient ways; yet, she begins to explore in this book a new path, a new way out of the male-centric vision that has guided and shaped the Kabbalistic traditions for all too long. . . There is more in this book to contemplate: a history of Kabbalah from ancient to modern adaptations within the modern occult group known as the Golden Dawn; as well as her own unique re-visioning of this tradition. . . .Plus a look at the history of modern Quantum Physics as well. . . . Her vision is guided. . . by an egalitarian view of both life and the mysteries of existence." ~Craig Hickman, Wisdom of the Earth

"Exactly what it says! Points the way  to a new millennium of Goddess worship." ~Marisa Young, Amazon.com Listmania! Pagan/Goddess/Feminist Classics

"...I bought this book assuming that I wouldn't like it, yet I was drawn to her premise and wanted to give the book a chance. I'm very glad that I did. Her treatment of Kabbalah very obviously stems from a study in Traditional Kabbalah, which for me indicates scholarship, dedication, and true desire to help seekers understand the subject matter. It would have been easy for Ms. Laura to use entirely hermetic sources and views in her treatment of Kabbalah, but instead she teaches from the source, from the heart of Kabbalism, and for that alone, I applaud her... Had I read [this book] several years ago, it very well may have changed my world. As it is, it is a sound, well researched, opinionated and interesting look at Kabbalah through the lenses of feminist spirituality. Job well done." ~Amber Simmons, Amazon.com

...a wonderful book that clarifies a once complex subject.  As a lover and student of Kabbalah myself, I found this book  so enlightening and encouragingly expressed, I wouldn't hesitate to recommend it to any layperson interested  in the feminine face of God as expressed in Kabbalah." ~Dryw, The Sacred Green   "I am teaching Kabbalah and have found this to be one of the more interesting and challenging, thought provoking books.... I really like the way you bring science into the spiritual/magical picture. I also appreciate the very scholarly way that you approach the idea of gender on the tree, and question it while at the same time offering several views. . . I really enjoyed the book immensely." ~Jewel St. Michel, Kabbalah teacher, San Francisco

In addition to the Study Guide to all chapters included in the Second Enlarged Edition of this book, a longer study guide in a separate ebook, Exploring Re-Visioned Kabbalah: A Study Guide...focusing in-depth on just the four Kabbalah/Qabalah chapters, is now available as  a Kindle E-Book, a NOOKbook, at Diesel eBook Store,  Sony Ebook Store, and at Smashwords in multiple formats, and at other ebook vendors. In the U.S. usual price is $2.99  (similar prices outside U.S.).

Among the books citing Goddess Spirituality for the 21st Century are:

Gilgamesh Among Us by Theodore Ziolkowski (Cornell University Press 2011), in discussion of works of interest in Goddess theology

Ways to Get Second Enlarged Edition of This Book

For the Trade: Goddess Spirituality for the 21st Century is distributed to the trade by Ingram and Baker & Taylor.

For Individuals: At brick and mortar bookstores. We hope it will be on the shelf, but to be realistic, bookstores with limited shelf-space cannot be expected to have all gazillion books in print on their shelves all the time. They will, however, usually be happy to order the book for you. So ask. You may want to help them by giving them the trade distribution and/or ISBN info above. At brick and mortar stores and university libraries that have the Espresso Book Machine, you can (or will soon be able to) request that the book be printed out on site for immediate availability. Go here for a current list of stores and libraries that have the Espresso Book Machine.

Extensive Content Details to get a better look at what this book offers.

She Lives! The Return of Our Great Mother, is a book that provides readers with a unique and insightful exploration of the divine feminine. Through myth-like stories, rituals, meditations, and songs, the author brings to life the idea of the return of the goddess. This book is essential reading for anyone interested in feminism, spirituality, or mythology.

Goddess Matters - This is another book that takes the reader on an informative and entertaining journey through modern Goddess Movements. It's timely, thought-provoking with many different aspects brought together in one place for readers to explore. Throughout the book, Judith Laura offers readers a fair and even-handed approach to a controversial topic, providing readers with the information they need to make up their own minds about the role of the Goddess in today’s world. If you want to know more about female divinity, this is a great starting point.

Three Part Invention – A different kind of read than all the others.

Beyond All Desiring - is the story of Sara Lyons, a unique individual who experienced many defining moments in her life. Events like depression and McCarthyism shaped this woman into what she ultimately became: an exceptional person with no one ever knowing about it. With beautifully written language by Judith Laura (I recommend you read this book if you enjoy fiction), Beyond All Desire brings us some surprises that keeps readers engaged throughout each page turned.

Learning as much as you can about a subject allows you to develop your own informed opinion, rather than adopting the view of someone else. It also gives you a greater understanding of the subject and enables you to hold intelligent conversations with people who are experts in the field. By reading all of these written works yourself, you’ll more easily become an expert a lot quicker.

In recognition that not everyone can afford to buy books, and in gratitude for the great service libraries provide, we share a partial list of public and university libraries whose holdings include either original or second edition of this book:

Source: worldcat.org   * With the exception of Ohio University, the author's alma mater, no books were donated to these libraries by the author or publisher